Editorial – We Have Never Been Modern: Educational Reflections


Editorial – We Have Never Been Modern: Educational Reflections


Introduction. Education, Technology and Democracy: Can Internet-Mediated Education Prepare the Ground for a Future Global Democracy?

Introduction. Education, Technology and Democracy: Can Internet-Mediated Education Prepare the Ground for a Future Global Democracy?

This introduction paper provides the context for the Symposium. It
begins with a brief account of the ways in which the Internet is being
held responsible for poisoning democracy, then unpacks the nexus of the three main terms of the title of this Symposium: democracy, education and technology. The conceptual aspects of this nexus are inextricable from the technical aspects. That is why it is appropriate that this Symposium integrates together papers that might seem primarily conceptual and papers that are more focused on technical issues of how to design to support deeper reflection and collective intelligence. This paper ends with a justification of the need to take an expanded ‘design based research’ approach to the issue of how education and technology relate to democracy. What we need now is not so much contemplative knowledge of relationships between abstract concepts but engaged knowledge that supports collective technology design, where we, ourselves, or the nature of human subjectivity and human subjectivities, are understood to be part of that technological design based research project.

In this article, we use a dialogical approach to discuss the relationship
between learning and democracy. In particular, we conceptualize
the democratic aspects of the Self based on the Bakhtinian theory of
Magistral, Socratic and Menippean dialogues, and on Herman’s conceptualization of the dialogical self. Using these theoretical resources, we aim at building a framework that allows to examine the emergence of democratic selves from learning interaction. In particular, we explore how the three forms of dialogue characterize the Self during a blended course and how students move from Magistral power identity positions to Menippean dialogues. We interpret these movements as revealing the emergence of a democratic expression of the Self.


Collective Intelligence Design and a New Politics of System Change

Collective Intelligence Design and a New Politics of System Change

While Internet technologies may support an emergent ‘wisdom of the crowd’ and new enhanced forms of political engagement, iterative designof technology is needed to better support our collective intelligenceand collective action into the future. Future iterative designs need toinclude a synthesis of political philosophy, education, and technologydesign that supports the emergence of a new, higher-order wisdom ofthe crowd, specifically, a form of team-based system science intelligencethat is matched to the complexity of the societal problems we face.Building upon the seminal work of John Warfield, we propose Applied Social Science as a new synthesis is this regard. Warfield argued fora form of applied systems science that incorporates basic science intoa technology-supported science of design, complexity, and action, andhe developed a specific methodology to support systems level thinkingand action planning in problem solving teams. While it is possible toembed Warfield’s methodology within the World Wide Web, we arguethat this is best achieved in the context of a new approach to collectiveintelligence design and a new politics of system change that upholdsfreedom as non-domination as a principle of dialogic engagement indemocratic educational and political environments. We also suggest theimport of design-based research (DBR) from educational science as amethodological approach to iteratively designing and evaluating infrastructuresthat support new forms of democratic political engagementon the World Wide Web.

In this article, I argue that Open Educational Resources (OERs) can create opportunities for democratic education by emphasizing collaborative construction, re-vision and updating of knowledge content. This may allow people belonging to different communities and social groups to take collective responsibility for the creation and maintenance of public knowledge content to be used for educational purposes. Such potential is only partially exploited if the practices of reuse favour consumption in place of co-construction. Moreover, although primarily intended
for formal education, the potential or OERs is best expressed in hybrid practices where formal and non-formal contexts are not intended
as mutually exclusive. A participatory and hybrid framework for the re-use of OERs in the long term might create the conditions of a more
democratic management of knowledge in the larger society. However, to fully exploit the potential of OERs there is a need to develop policies and practices able to address a number of challenges raised by the hybrid, participatory, and technology-enabled co-creation, re-use and re-mix of public knowledge.


Adaptive Signposts out of the Echo Chamber: Enhancing Argumentation in Social Networks

Adaptive Signposts out of the Echo Chamber: Enhancing Argumentation in Social Networks

Social networks such as Facebook allow for participation in debates on socially and politically relevant issues. Facebook is a strong agenda setting medium, making participators both consumers and distributors of information and opinions. Considering the strong effect of Facebook on the reinforcement of one’s own (political and social) attitudes and beliefs, how can we facilitate deliberate argumentation in social media? Could we help developing informed and active debaters through scaffolding their argumentation with scripts that are tailored to participators’ personality traits? Here, we discuss the need and ways to support argumentation with adaptive scripts in social networks to foster critical, argumentative discourse. For this purpose, we present a new approach to individually facilitate and analyze sound argumentation in the wild by help of a Facebook app, enriching the personal experience of social media as a medium for critical participation rather than affirmation of held views.


Designing Education to Promote Global Dialogue: Lessons from Generation Global – a Project of the Tony Blair Institute for Global Change

Designing Education to Promote Global Dialogue: Lessons from Generation Global – a Project of the Tony Blair Institute for Global Change

This paper focuses on the issue of how to design pedagogy and technology in order to overcome the much reported echo-chamber effect of the Internet and promote global dialogue. Some of the findings of a large scale evaluation of Generation Global—a project of the Tony Blair Institute for Global Change (previously called, ‘Face to Faith’) are presented in order to establish that this project is effective in promoting its aim of dialogic open mindedness. Some of the features of the programme are described and analysed, especially the latest version of the web-site which supports team-blogging for young people in schools around the world. We argue that this specific combination of technology and pedagogy offers one potential model for the induction of children globally into the effective use of the Internet where such an induction is understood as a necessary precondition for a potential future global democracy.

This essay focuses on the decolonial thought, a perspective born in Latin America and still little known in Italy. In the first part, I will consider some main concepts — such as the coloniality of the power and knowledge — with the intention of clarifying the contours of the decolonial criticism to eurocentism and social sciences, as a epistemic justification tool of the modern colonial. Then I will deal, more specifically, with the decolonial pedagogy, outlining guidelines, practices and experiences. Finally, starting from an in-depth reflection on the critical intercultural education, I will show some of the most significant implications of the decolonial approach for the Italian context.


Creativity for Community. The Ethical Character of the Creative Person

Creativity for Community. The Ethical Character of the Creative Person

Person has an extraordinary capability to create. This capability is a resource for the community. However, what is creativity? Creativity can be interpreted instrumentally or assertively. Person makes an instrumental use of creative capability when he/she disassembles and reassembles the experience of reality, exploiting its implied possibilities. The assertive use, instead, involves person in the creation of an ‘other’ order. Thanks to this meaning, person represents the existence as it could be lived and acts to realize it. The sense must be lived as an essential and inexhaustible commitment. This use shows then an ethical character: the direction involves the responsibility of everyone in the change of a common destiny. Starting from the discussion on the possible actions of the creative person, the paper will recognize the community as one of his/her more meaningful expressions. As such, community becomes commitment and promise for an educational process interested in a change according to human direction. Keywords: change; value; judgement; responsibility. 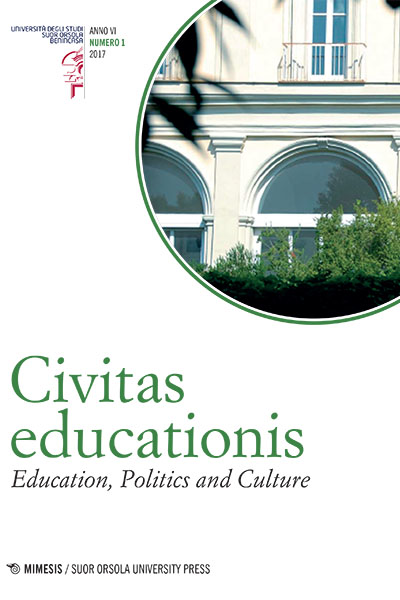