Written in the style of a seventeenth-century Jesuit sermon, Watery Graves takes its title from a sonnet by Giacomo Lubrone, a distinguished Jesuit orator and poet of the period. The piece was inspired by the death of a group of young Senegalese who left Dakar or a nearby port for the Spanish Canary Islands on Christmas Eve in 2005. After drifting thousands of miles off course, the boat eventually ran aground off the Caribbean Island of Barbados. Watery Graves is an invective against the blindness of the wealthy and “developed” Western world that allows thousands to die in the Atlantic, the Mediterranean, and the African deserts while claiming to safeguard the “European Fortress” against immigrants. As is typical of Baroque sermons, the text is also a pastiche, drawing on the Western literary tradition of maritime meditations from Coleridge to T.S. Eliot and Paul Valèry. The sermon was performed on stage at the Naples Theatre Festival in June 2008 with Massimo Popolizio in the role of narrator.

Usury and manifest usurers are, in the medieval economic discourse, more than the representation of an actual economic abuse, a visible theological and political metaphor of the infamy of fact, the blatant and shameful public attitude of those who could not and don’t want to be be recognized as Christians. The paradigmatic portrait of Judas in many medieval theological and juridical writings became the durable representation of infidels who, like Jews and heretics, showed their own “infamy” by their resistance both to conversion and understanding of Christian social/economic values.


Living a “normal” life. Perceptions and practices of albinism in the wake of humanitarianism

Living a “normal” life. Perceptions and practices of albinism in the wake of humanitarianism

The present article highlights ideas, discourses, and practices of people with albinism in the wake of humanitarian actions and (inter)national media debates about the stigma and social issues they face in Tanzania. Based on 11 months of qualitative research, the analysis reveals how perceptions of albinism are linked to moral/religious and local ideas, global circulation of humanitarian practices and (bio)medical information on the congenital condition. Therefore, the ethnographic findings demonstrate that values originating at the global level and (bio)medical explanations of albinism influence how people with albinism perceive and make sense of the congenital condition.

The article analyzes begging in Western European cities today. Begging has ancient origins and yet is intertwined in today’s chronic issues: not only in power configurations and governance, but also in job-related and forced migration and social and financial alienation Thus, it is embedded in the political, social and cultural mechanisms in action, especially in those centrifugal forces apt to distance certain groups of people from city centers, public spaces and legal protection. Here, begging is connected to capitalism-generated systems of inequality along with the analysis of negative reciprocity. Additionally, it is interpreted also as a practice of wealth redistribution and as an act of resilience.


Blind forces in search of a meaning. On some microphysical aspects of loneliness

Blind forces in search of a meaning. On some microphysical aspects of loneliness

The term solitude contemplates the double meaning of solitude, on one hand the momentary separation from a world which remains vivid inside us and, on the other, loneliness – the inability to be part of any of the contexts or “worlds” that surround us. This paper focuses on some systems, above all on the theological one, that have produced socially acceptable forms of solitude, the ways in which they are ritually interiorized, and the importance of regulating this “pain of interaction”. The management of the mood of exclusion is a match of political nature whose field is a space where physical and social elements are undistinguishable, whose goal is a regulated order in social relationships. Other than contexts in which it is considered possible and usual, solitude doesn’t have a voice, it cannot be included in a signaling system, it cannot be identified in a value and exposes one to the risk of abandoning the world.

In an era where literature, sucked, as it is, into the totalizing (totalitarian?) mainstream of the participative and “interventionist” communication of social networks, risks losing the spaces of its own specificity in an progressive and inexorable manner, and the prerogatives deriving from the claim of its peculiar asymmetry (“ghostification” of the recipient through the preliminary suspension of its feedback and reception), the forms of correspondence with the dead examined in this essay as exemplifications of a fictional act that shamelessly assumes the vice of form inherent in a use of writing that calls upon a interlocutor from whom, obviously, no answer is expected, help us to refocus on the original meaning of making literature, on the inherent vice that constitutes it.

The article is divided into two parts. The first discusses the notion of “form of life”. In contemporary philosophical debate, this expression has acquired a significant role. Its theoretical topicality has shown an unusual convergence with the growing scientific interest in autistic spectrum disorders. The second is an in-depth discussion on the philosophical assumptions on which the internationally widespread diagnostic test of autism that is currently being distributed in Italian schools seems to be based (the Social Communication Questionnaire), in order to show its inconsistencies and weaknesses.

Antonio is a man, Pasquale is a man. Their clandestine love has lasted for 24 years, though tarnished by the rumors of a small South Italian country that have defined it as a sickly love. What unites and separates two people so close but distant at the same time? In what way, or in which ways, can a person like themselves love another person without becoming the subject of a narration filtered by social stigma? If loving one another is a pathology plagued by irrationality, why can’t a same sex couple love each other openly unless accepted by the community they live in? This biographical story tells of the unease with which the collectivity in an urban community participates in this kind of contemporary evolution. Therefore, even a human relationship can be redefined as a bad habit, which in some way reinterprets the biographical and social narrative of two lives, alike yet different from themselves.

This essay concerns some of the most significant works of Orlan and their representations of human body. It will attempt to observe how the Orlanian eccentric art became illustrated pathology. Her reinterpretation of Judeo-Christian iconography, the series of surgery-performances, the rebuilding of her face, the graphic self-hybridizations and her use of the most advanced features of biotechnology allow the performer to touch on aesthetics, psychoanalysis, anthropology and science. Even if the mise en scène of the deformed, artistical orlanian body has contrasted the traditional aesthetical canons and has generated reactions of rejection and disgust, it has engaged in “politics” in the ancient sense of the word and has produced new forms of sociological intelligence.

Atelier dell’Errore is a Visual Narrative Arts Lab dedicated to kids and youngsters sent to the Atelier and certified by Child Neuropsychiatry of the Health Services in Bergamo and Reggio Emilia. As an artist, working side by side with these special kids for 16 years, I learned this revolutionary law. In the Atelier: the opposite of Normal is Special; the opposite of to Look and to Watch is to See; the opposite of to Hear and to Listen to is to Feel. That’s why when Teatro delle Albe in springtime 2017 asked us to present our project at Teatro Rasi in Ravenna during Enter/ Doppiozero Festival, we wrote our first dramaturgy. The text has been inspired by the notes the youngsters of the Atelier leave on their drawings. On the stage we have 8 youngsters of the atelier and 3 others take part in the play as techies. None of us has never studied Theater. But everthing works in the Atelier, thanks to the powerful poetic strenght of these special kids. This article is the write up of our first theatrical performance. 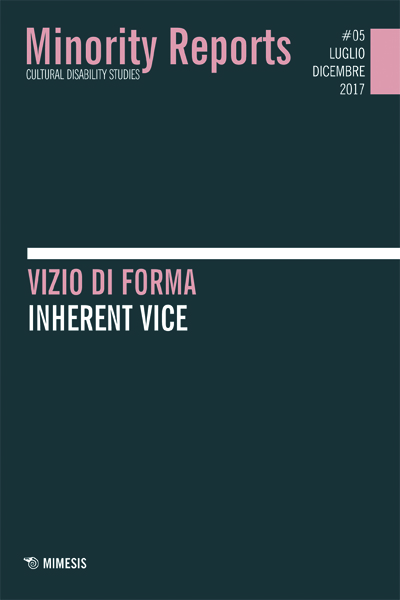