The Great War is the great laboratory which legitimizes different body shapes – first stigmatized –, incorporating them into a paradigm that aesthetises the wounded and mangled bodies, through continuous exposure of these, giving a high priority to images. But the cross-dissemination to the categories and classes of this body-icon that refers to this new cultural paradigm that breaks the triumphant hero of the nineteenth century, will facilitate the emergence of a new category which, through various changes and metamorphoses, comes to say “disability” as a condition produced not by nature, but produced by a non-ordinary relationship to society caused by something external to the subject.
And it is probably why only after the First World War one can speak of “disabled” as a separate category, a category which attracts gradually into its orbit, articulating from time to time reports, the large constellation formed by many bodies and the many minds for which is interrupted the ordinary mode of relationship and so the access to social space and community is interrupted.

The field of disability is thus formed from a long legacy of categories which emerged from particular situations, the common thread being what brings the constant relationship between body and society, or situations where a breach of the physical or psychological integrity jeopardizes the completion of a role or social activities normalized, especially the work, at least until recently. This article focuses on the 20th century, a particularly fruitful period in terms of meanings and devices related to the issue of disability. The combination of a political current, solidarism, a contingent event and significant consequences, the Great War and the birth of the first disabled associations, offers a particularly enlightening context for understanding both the dynamics of constitution of the field disability, and protests and mobilizations of people with disabilities who have not since stopped tranform it. In France, the emergence of disability policies in the second half of the 20th century can be understood only in the context of resituated solidarism and social debt that is taking place during the Third Republic. Solidarity based on the assurance is then set up in the form of financial compensation, however, confined to situations where the disability is the result of a collective activity. The subsequent labor shortage in the Great War will encourage the foundation of rehabilitation as directly affecting the mutilated bodies. Social law is established at the cost of a difference in treatment between categories of invalids, causing the mobilization of “civilian invalids” who are then excluded. Two contrasting pictures of disability will permanently echoed these social categorical treatment, until the homogenization of dedicated field in France by the law of 30 June 1975 “for persons with disabilities”. The first one emphasizes the status of “victim of the Nation” and struggles for human rights,the other is derived form the subjectivity of disability as a “selftest” and normalization of disabled through rehabilitation.

The article intends to highlight the welfare policies, public and private, for the protection and care of invalids of the Great War prepared in Italy between 1915 and 1923. The first response to the health care and social emergency came from the Italian Society: in many cities were founded in fact “Support Committees” who worked on the rehabilitation of wounded soldiers and the creation of a welfare culture were founded. In 1917 it was founded the National Society for the Protection and Assistance of War Invalids (Onig). This will be the public body charged of medical and social care for soldiers rendered permanently disabled from participating in the war. In the same year the National Association of War Invalids and Wounded (ANMIG) was born, an association of a private nature, set out to represent before the State and the Italian society the interests of War Woundeds. The framework of charitable actions is completed by the “Labriola Law” of 1921 and by the pension reform of 1923. The article, after describing the birth and development of care practices, also proposes some research perspectives of research.

During the first two years of WW1, the Italian government found itself unprepared to face the serious issue of disabled and mutilated people. So it gave the managment of it to local initiatives, which were not well linked among them and very badly coordinated, rasing inefficiencies and wastes. The production and supply of artificial limbs appeared as a “prothesic babel” due to the differences and the bad communication among the different facilities across the Country. Excluding Turin’s and part of Milan’s area few and small were the other companies operating on the national market. More than once and bypassing the rules, the powerful American industry tried to make room for itself in a booming market, after it had been abandoned by the German companies due to the Triple Alliance breakdown. This commercial infiltration that was causing serious damages to the national industry was mainly stemmed by the two leading centres in the prothesic industry: Bologna and Milan. The 1917 law gave rise to the “Opera Nazionale”, an organization for the protection and assistence of the war invalids. The organization entrusted the leading role in the prothesis’ production to Bologna and Milan. However, especially in the civil sector, the unsolved problems were still many, and it took long time before the rights of a modern welfare state were recognized to disabled people and amputees.

The text introduces and rebuilds the debate within psychiatry about the neuroses and war trauma. It follows the rise and the contrasted affirmation of the point of view of psychiatrists who recognize the war as a cause in itself of the many traumas that affected the soldiers, but also civilians engaged in war. It is thus reconsidered the idea which wanted the war was only the trigger moment of a problem that was already present in subjects, shared viewpoint along the different seasons of war.


War related nervous disorders in southern Italy. Psychosis, melancholia, and alienation in the Girifalco asylum during the Great War

War related nervous disorders in southern Italy. Psychosis, melancholia, and alienation in the Girifalco asylum during the Great War

The research aims to address the human journey and the drama suffered, between 1915 and the years after the Great War, by the soldiers from the southern Italy interned at the Girifalco (CZ) asylum. Through the study of medical records, it is possible to outline the irruption of new mental disorders caused by the life in the trench, as well as to ascertain how the Great War represented an irreparable fracture between the prevalently rural world in southern Italy and the incipient modernization of a society which was at its peak due to technology applied to war and to the “scientific organization of death”. From this perspective, the study of the distorted mental world of the many southern peasants/soldiers is enriched by new analytical insights enhancing the theme of psychosis and neurosis caused by the war. The act of war, not understood and substantially suffered by the subordinate classes from the south of Italy, turned into an experience of cultural apocalypse in which the disappearance of domestic horizons as well as of the corporeal existence, will leave room for a new experience of alienation and delirium which will lead many fighters to seek refuge elsewhere in a universe covered by a mystical and apotropaic rituality.

This bibliography related to the First World War in the National Library Service (SBN) is updated to July 2014 (exactly one century after the first declaration of war). The research was carried out on certain subjects that had a bearing on the chosen theme (war, war invalids, invalids’ associations) and then follow the publications related to similar subjects. Among all surveyed volumes then sorting was done to select publications that seemed most appropriate for the purpose of a historical reconstruction linked to the condition of persons with disabilities and to the policies and actions in their favor.


Disability politics in portugal and the colonial war

Disability politics in portugal and the colonial war

The Portuguese Colonial war was fought between Portugal’s military and the nationalist movements in Portugal’s African colonies between 1961 and 1974. The conflict opposing the Portuguese Armed Forces to the independency movements in Angola, Mozambique and Guinea-Bissau is crucial to understand the transition to democracy brought on by the Carnation Revolution. Notwithstanding, a manifest silence of Portuguese society as regards to the Colonial War has subsisted during decades. Through the perspective of disabled war veterans this article attempts to recover crucial testimonies valorization of the Colonial War as a historical moment which has left long-lasting marks on Portuguese society. Moreover, this article aims to explore the impact of Colonial War’s disabled soldiers in Portuguese disability policies and politics.


Of rights and wrongs. Assessing disability rights in Portugal in the era of austerity

Of rights and wrongs. Assessing disability rights in Portugal in the era of austerity

Long fought for by the global disability movement, the Convention on the Rights of Persons with Disabilities (CRPD) held the promise of rights and a life with dignity for all people with disabilities worldwide. Portugal was amongst
the first States to sign and ratify the CRPD, thus committing to advance policy reforms and shift from a charity to a rightsbased approach to disability. Almost a decade has passed by now - Portugal has plunged into a deep economic recession and fiscal crisis and endured a strict austerity plan from 2011 to 2014. What has this done to disability rights? This paper examines this question and offers an overview of disability rights progression in Portugal. Assessing the impact of austerity and a neoliberal agenda on the fulfilment at domestic level of international human rights commitments, we discuss the complex interplay of law, policy and politics in contemporary societies and the role of disability studies in advancing rights.


Disabled states and impaired citizens in the global south. Bio, necro to impairometrics

Disabled states and impaired citizens in the global south. Bio, necro to impairometrics

Millions of Afghans encountered by the United States military have been subjected to the collection of their biometric data such as facial photos, iris scans and fingerprinting. The United Nations High Commission for Refugees routinely collects biometric data from populations under its care. Border crossings now also require the collection of biometric data. In this paper, I examine the role of the ‘capturing’ of biometric data and link to security in the light of a colonial past, war on terror and neoliberal citizenship. Then, I note how evidence-based and quantifiable interventions are linked to epistemologically and ontologically redefining “impairment” and “disability”. Through several concrete examples, I show how, what I term, impairometrics have become prevalent in neoliberal discourses and aid in the global south. In conclusion, I argue impairometrics are predicated on a new racial (bio) genetic and quantifiable eugenic pathology which can lead to necrometrics.

This collection of images is an excerpt from a broader project. The aim is to gather an atlas of bodily forms in which
social and biological “norms” are called into question by irreversible physical conditions. The idea is to explore the boundary lines, or areas of instability, where the identity process, of recognition and exclusion, are at play. The project does not regard the ontology or the sociology of disability but rather the images (how they work, how they are interpreted). In this table I have collected in chronological order 15 photographs of war wounded, from the American Civil War to more recent conflicts. If war is a colonial act, then the wounded and amputated body of civilians and soldiers is probably the place where victim and critic of this colonial act coincide. More generally speaking, images of the physical signs of war are an observatory on the mechanisms of the collective imagination of the human body. They are also the first step towards reflecting on the necessity of decolonizing this imagination. The images’ captions are merely field notes, more useful for triggering reflections than for launching analytical discourse. 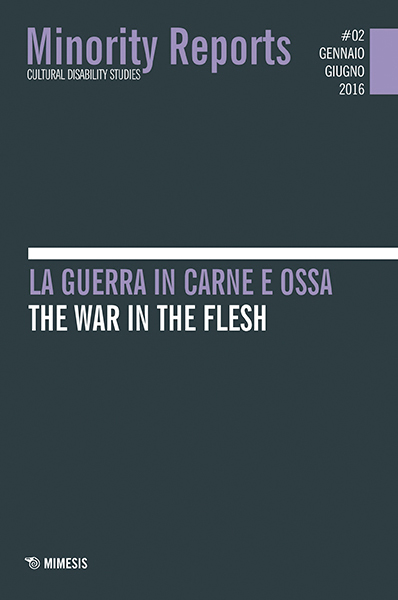