As a rule, the acts of capture of speech are extremely repetitive. But a marginal share of capture of speech consists of unexpected words as for time, place, object, or subject of their emergency. Among these, moreover, a small set is known to be unexpected as for all these elements simultaneously. Where and when they should not have happened, acts of improbable enunciation burst out from unlikely people, that a minority of forces relegated to silence. The dialectic between text and image outlines the essential features of these acts of speech that impose a new order to the movement of the speech.

From the barely intelligible words spoken by the vast and heterogeneous unreasonable population studied in the Madness and Civilization, to the parrhesiastic practise, Socratic and cynical in particular, analyzed in the last courses at the Collège de France, all of Foucault’s work could also be considered as an attempt to establish the conditions that make capture of speech possible. A capture of speech, however, which is not just a repetition of statements that preceed and subject the speaker but rather an act of enunciation by speakers able to establish themselves as free subjects of a truthful speech.


The emergence of the “psychic handicap” in france, between social criticism and psychiatry. From the ethnography to the moral genealogy of a claim

The emergence of the “psychic handicap” in france, between social criticism and psychiatry. From the ethnography to the moral genealogy of a claim

This article retraces the emergence in France of the concept of «psychic handicap» (handicap psychique) in the wake of the introduction in such country of the Icf philosophy. Starting from an ethnographic fieldwork realized in the psychiatric ward of a University hospital in the Parisian region, we try at first glance to analyze some very localized critical operations governing the social life of such concept between two distinct and interrelated social fields: the one of cognitive psychiatry and the one of families and users associations, considered as «moral entrepreneurs» of the psychic handicap. As a second step, we try more globally to shape a moral genealogy re-interpreting the social claim for such concept as a part of the «suffering politics» which have been partially redefining the collective meaning of French social and health policies during the last years. The final part of the article calls for a critical sociological approach to social claims in psychiatry and mental health.


Not so distant voices or still lives. Paying attention to the voice of the psychiatric service user and survivor voice in research

Not so distant voices or still lives. Paying attention to the voice of the psychiatric service user and survivor voice in research

Post WWII years brought a new wave of therapeutic discourse and practice parallel to the spectacular development of neurobiological approaches to “mental illness”. Today, against the latest rebirth of psychiatry as a “Global Movement” grounded in a resolutely neuro-bio-genetic approach and the resurgence of reactionary practice, a new phenomenon is emerging, Mad Studies. Mad Studies is the umbrella term for a growing movement of re-appropriation of ‘madness’ that goes beyond protestation. While its concerns are hardly new, its focus on theoretical and conceptual approaches and on the representation of critical alternatives to the medicalized understandings of madness means that it has an important contribution to make to disability studies. Following a critical and reflexive view from my own perspective as a survivor-researcher and activist, this paper will explore aspects of the paradigm shift that Mad Studies offer. Specifically I propose to explore the voice of users and survivors in psychiatric research using a variety of examples and how this involvement helps create a new epistemic and political appraisal of the concerns and interests of the “Mad”.

The history of the movement of people with disabilities in Italy is far from being written. The challenge poses many problems to the historical research: the sources are often incomplete and scattered in associative and often private archives; the individual stories of the associations are still scarce and mainly celebratory; also publications on the subject are really modest. This article will attempt to define a first reconstruction of the history of the association movements, starting from the First World War until the early Seventies of the last century, putting it in connection with what was happening outside of Italy.

The article is a reconstruction of the capture of speech of some female leaders of movements of people with disabilities in Italy, from the Seventies to today. Following the bourdesian method of La misère du monde, the stories were collected through interviews and faithfully rendered from a double point of view, the one of those receiving the witnesses and feeling the need to understand, and the one of those explaining to themselves and others how things went. A story emerges of small gestures alternating with powerful statements, as well as with failures and defeats.

The article is a first reconstruction of the experience and work of Rosanna Benzi, founder and director of the review abstracts 281 “gli altri”. Struck in 1962, at the age of fourteen, by a severe form of polio, which caused a motor and respiratory paralysis, from the onset of illness until death, Rosanna Benzi lived in an iron lung at the San Martino Hospital in Genoa. A special predisposition to understand, combined with cultural ferment and the meeting with a “human medicine” allowed her a life of relationships and commitment, dedicated to the fight against architectural and mental barriers. The review she directed has been the site of innovative processing in the field of emancipation and the first, at least in Italy, to recognize and assume the task of criticism of all forms of marginalization.

“We came out of the shadows, we had no glory and we had no rights, and that is why we are beginning to speak and to tell of our history”: this sentence, spoken by Foucault during the course at the Collège de France entitled, Nousavons à défendre la société could be the slogan of all forms of emergency of a dissenting word. The infamous, literally the one who is unworthy of men’s memory, tries to get out of hell by launching a tirade against the power that subjects and silences him. His word is a belligerent, performative one, doing immediately what it says. It is similar to the declaration of war directed to Franco Basaglia by an inmate in the asylum of Gorizia: “Doctor, you can also buld us a hospital made of gold, but we will always remain enemies: you are the healthy one, who in the evening returns home, and I am the patient who, because of his illness, is deprived of his liberty”. 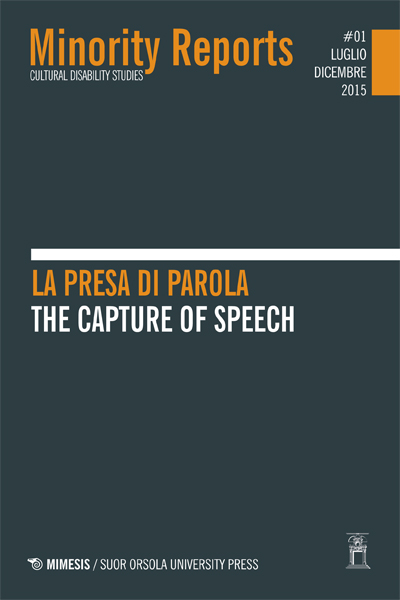