Visual glossolalia. The spiritistic photography between science and religion

In 1895 Ferdinand de Saussure, the father of sémiologie and modern linguistics, was called by his colleague Théodore Flournoy, Professor of Psychology at Geneva University, to examine a curious case of spirit possession. The case regarded a lady, known with the pseudonym of Hélène Smith (1861- 1929), who had attracted attention from several scholars thanks to her paranormal activities, manifested under a state of trance and somnambulism, which were examined under the label of “glossolalia”. A few years later, in 1905, another group of scientists and scholars of international fame which included Pierre and Marie Curie, and three other future Nobel Prizes like physicist Jean Baptiste Perrin, physiologist Charles Richet and philosopher Henri Bergson, were gathering in a flat in Boulevard Saint-Germain, in Paris, to study a famous medium of Italian origins, Eusapia Palladino (1854-1918), whose possessions and paranormal activities had captured attention from the scientific world. For all these researchers, spirit mediumship needed to be studied not to unmask any magic or tricks, but as possible paranormal exploration of the boundaries of science itself. In this paper, we will explore these themes through the semiotic analysis of a photographic corpus including these and other analogous cases, then examining more closely the work of William Mumler (1832-1884), first example of spirit photographer. By drawing on de Certeau’s definition of glossolalia, based on Saussure’s analysis, as transition from silence to speech, and construction of a vocal place of circulation of meaning, we will examine this corpus as a form of visual glossolalia – in which spirit photography inaugurates a space suspended between non-life and non-death, marking a passage between visible and invisible, between the here and the beyond of world and representation. A space in which ghosts with indefinite contours, portrayed next to the living, show the movement of visual enunciation itself and of its realisation, both questioning and founding at the same time the status of the image. 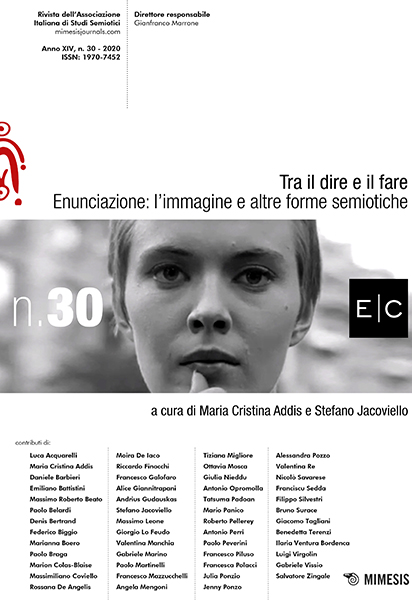 Published
2020-03-19
How to Cite
Padoan, T. (2020). Visual glossolalia. The spiritistic photography between science and religion. E|C, (30), 329-344. Retrieved from https://mimesisjournals.com/ojs/index.php/ec/article/view/774
Download Citation
Issue
No 30 (2020): From Language to Semiotic Productions. The enunciation: the image and other semiotic forms
Section
Section 8