Puppies and Food in Animation Cinema: a Semiotic Gaze

The contribution proposes to identify and analyse the main representations of the "puppy eating" in animation cinema (from the first feature films in cel animation of the 1930s to the most recent productions obtained through the technique of computer-generated imagery). The term "puppy" will refer both to the human and animal genre proper (as well as to the "quasi-human" Pinocchio), including both subjects in the first years of life and other animals or individuals who, for the most varied reasons (from Dory's memory loss, which determines her condition of perennial naivety and lack of knowledge, to the ease in which the young Lilli grows up, which makes her decidedly less "grown up" than the vagabond Biagio, etc.), are staged in their process of identity maturation and personal growth. The semiotic analysis of several case studies, identified for their significance within the very rich production of one of the major international film production companies - the Walt Disney Company, which in 2006 also acquired Pixar Animation Studios -, will allow us to describe in closing the way in which the representations considered seem to promote certain readings of the bond between puppies and food experience, investing the latter with particular values and meaning effects. 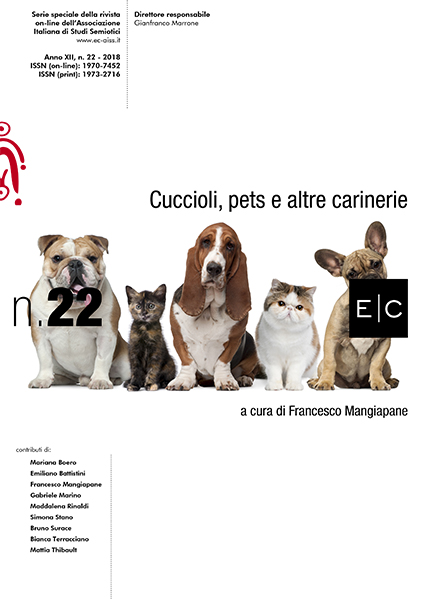