The purpose of the following essay is to explore the couplehood in the age of “emotional capitalism”. In doing so the author analyzes the notion of “desire” by taking into account two myths, the first is the myth of king Mida, and the second one is about another king, Tantalus. Despite they depict two opposing narrations (Mida was rewarded for a good deed and Tantalus was punished for a dreadful one) they both show the aporetic and insoluble logic of desire: the impossibility, for the the subject in search of it, to get satisfied. These myths seem to describe a modern condition, namely the couple. In the capitalistic age, the couple, a seemingly simple unit, bound by free choice and sentiments, has become enormously difficult to achieve. This study tries to highlight what makes the couple into an “emotional utopia” and why the couple itself might become the last social unit that works according to principles that oppose those of capitalism.

Eroticism is generally thought of from two different and opposite points of view. On one side like undressing, an experience that is willing to tear apart, in an iconoclastic gesture, the body’s veil that is reaching to touch the most intimate heart of being; and on the other side as to cover again, an iconophilic vision that tends to infuse value to the body’s surface but with the intension to recognize to the epidermis an involving appeal in the instinctual relationship. Beside these two we can see a third mode, who’s feature is to overtake iconophilia as well as iconoclasm, the undressing and dressing once more, in order to replace them in a transcendental type of prospective.

The purpose of the following essay is to explore the main concepts emerging from Eva Illouz’s sociological reflections about the modern culture of love. Within her studies, the author focuses upon the relation between the principal ideals claimed by modernity (such as freedom, equality, autonomy) and their socialization, institutionalization and organization into the various social spheres – particularly the emotional one. Here emerges the so called “emotional capitalism”, i.e. that particular cultural logic in which the “feeling” is the meeting point not only of the emotional instances but also of attitudes and practices belonging to the realms of the economic and the psychological.

Using selected examples from early avant-garde literature, the present paper tries to show that sexuality always played an important role in the 20th century’s utopias and is inseparable from their political side. In fact, it is political in itself. The author begins by analyzing the reputation of misogyny which affected futurism at its very beginning, due to several statements of the movement’s founder, Filippo Tommaso Marinetti. How-ever, he does not stop at the surface of these texts, but rather, tries to emphasize the other side of futuristic misogyny: by refusing to attribute to the woman her traditional role, Marinetti in fact opened the way for women’s emancipation. The futurists of the second generation distance them-selves from the ideology of the founder, but continue exploring the role of women in the future world in different directions: one direction led to the past and wished mankind would come back to nature (Vasari), the other explored the possibilities inherent in gender equality, detaching sexuality from gender, thus anticipating posthuman scenarios (Fillia). The paper also provides examples of how imagination about sexual life in the future world became an essential ingredient of almost all dystopian visions of the 1920s and early 1930s, and explores some links and similarities between them (ao Čapek, Sosnkowski, Zamyatin, Huxley).

In Meister Eckhart’s German sermons, the path of the soul towards God can be read as a sort of “operative identity” in which both man and God are asked to co-operate to the Son’s birth. The condition for the creature to gain this unity lies in the effacement of images from the soul. Following Reiner Schürmann’s reading of Eckhart, this paper qualifies the identity with God as an existential condition which is marked by a wandering joy, i.e. the fragile and precarious joy of the pilgrim.


Beyond the Subject: Early Greek Conceptions of Corporality

Beyond the Subject: Early Greek Conceptions of Corporality

This article investigates the notion of subjectivity by way of a detour through classical Greek notions of corporeality. It focuses on the tension between different figurations of the word sôma within an ancient Greek context, exemplified by a contrast or counterpoint between later Platonic and earlier pre-Platonic meanings of this word. Turning to Homer, it finds what might be called a conception of “corporeality without body” and goes on to argue that this lack of body is related to a lack of what could form the basis for a subjectivity or a subject. It takes some of the various denotations that the term sôma carries within early Greek thinking both as a point of departure and as a means of providing a context outside of and in contrast to contemporary ways of conceptualizing and understanding corporeality that can serve as a background to shed light on subjectivity. If our present situation is to a certain degree governed by conditions and determinations that were laid down in what can be called a Greek past, then it is important to go back in order to open the closure of the present that these determinations enclose. This takes me to a slightly different approach to the past. The past can also be considered as a context outside of contemporary notions and conceptions that are otherwise so obvious to us that they have become invisible. The past as something different emerges then rather as something against which we can contrast the present. Considered in this light, going back to a distant past, such as the one we can find in early Greece, can appear as a project whose aim is to bring to light something of the strangeness and the foreign aspects of an early Greek context in order to bring into relief conceptions belonging to our own time. I argue that a turn to Homer offers that outside context against which contemporary conceptions and productive new approaches to them can emerge.


Philosophy and the Denial of the Body

Philosophy and the Denial of the Body

Assuming that the body is an object or a subject implies that perceptions and affections take place in an object or are the properties of a subject. In this sense there is no irreducibility of perceptions. The seeing, feeling and speaking body are properties of organs or consciousness. This makes it impossible to realize how far today our senses and affections are absorbed by modern technologies of vision and language. At the sametime current theories (of vision and language) cannot cope with the de-realization and de-symbolization affecting the senses. Art is superior to any theory in confronting this problem.

This article compares some aspects of the philosophies of Gilles Deleuze and Mario Perniola. More specifically it will present an engagement with the concept of the fold, a concept that is fundamental in Deleuze’s monograph Le pli – Leibniz et le baroque (1988) and that Perniola adopts in Enigmi: Il momento egizio nella societá e nell’arte (1990). Starting with a presentation of Deleuze’s study of Leibniz’s monadology, the article will move on to study possibilities and risks in Deleuze’s own nomadology, especially based on selected chapters of Deleuze and Guattari’s Mille plateaux (1980). In the second part of the article, the focus will be on some aspects of Perniola’s philosophy, aspects that will be studied in relation to Deleuze’s thinking and that will center on the concept of the neo-baroque, and on Zen and the figure of the samurai. Through these connections, the article seeks to explore tensions and affinities between Deleuze’s and Perniola’s thinking about processes of subjectivation in late modernity. It seeks to explore some of the challenges to be faced when engaging with such issues today, especially with regard to the risks and gains when life itself may be considered to be both vital and fragile.

The Author emphasizes that no artist has ever watched the reality as “surprised” from its outward appearance, because contingent and changeable, it seems to show “other” to the eyes, always different from what it was, it could never hold “permanently” the attention. After Plotinus the possibility of a artistic form is recognized according to the principle that everything is always identical to itself. From this philosophical change, the misunderstandings arise about beauty, because the West wants to understand by what mode of being, the existing can be really “beauty”. The interest has been directed only to analyze the “modes” of the artistic doing as authentic generator  of “beauty”, “modes” able to shine the invisible “unity” as basis of every possible proportion or symmetry, but the “modes” are necessarily “infinites”. What will be the thing able to became perfect expression of the whole and able to transcend its “partiality”? It’s the same think that offers to the sensible look of phenomenic perception, not “different” from the things that appear. The Author points out that no “other” determinate could never say the whole, if no denying its own partiality and the “whole” will never be which the “part”. In the modern age, this truth will become more clear to the point that Balzac will say that the “beauty” speaks of “nothing, but a nothing that is the whole” and Duchamp will equate a painting by Titian to a bottle rack, not considering the art as an object, art where the unconditionality of the ego is reflected. 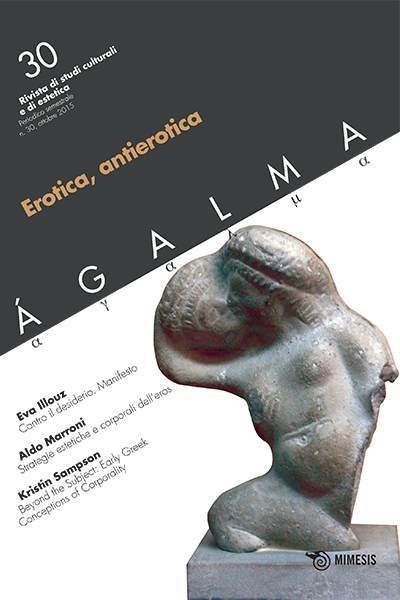