The author examines L’Instinct de mort, the autobiography of Jacques Mesrine, who was one of France’s best-known criminals at the time of the book’s original publication in 1977. Convicted of bank robbery, kidnapping, burglary and several murders, Mesrine was particularly famous for his spectacular escapes from prison. When police killed him in 1979, he had already become a legendary figure, and remains so to this day. This essay situates Mesrine within a long French tradition of “literary bandits” and tries to grasp why these figures exert such public fascination, even when they are by no means like Robin Hood. It argues that they represent the desire for individual freedom and revolt and, at the same time, the conquest of wealth and power. These outlaws are both inside and outside the capitalist Abstracts ÁGALMA 115 system – it is this ambiguity that constitutes their charm for people who may admire their courage and freedom even if they do not completely approve of them.

Scipio Sighele (1868-1913) was formed in the atmosphere of positivism. He was a university professor and lawyer. He analyzed the phenomenon of the murder of several individuals. He studied the characteristics of the modern crowd. He took care of the endemic ills of the early twentieth century city. He became interested in the problems of the state and the marginalization of women. He contributed to the birth of the sociology of literature.

Society, like any living organism, works to maintain a certain form of cultural homeostasis, applying an immunological defence mechanism against all otherness that diverge from the agreed paradigm. Into social fabric there is a figure that could weaken the established order with its ethic cruelty attitude: the artist. Acting on reality, he shows lies and subterfuges necessary to hold the social agreement. Exposed by him, society tries to defend itself by shooting down the guilty of turmoil, converting him from tormentor to victim. According to form a new tidiness, community must be fulfilled by artist’s sacrifice that will catalyze, like as a scapegoat, drives and instincts pressing on it, returning things to their condition of significance’s possibility. However, as any virus, artist cannot be completely eradicated and the new order, based precisely on its act of breaking, will be restored in a new equilibrium that needs to stay alive integrating him into its making forms. The human experience that binds Antonin Artaud and Vincent Van Gogh in Van Gogh, the man suicide by society by Antonin Artaud will support this utterance.

The essay aims at examining some forms in which art has described that peculiar pleasure that arises from destruction. Usually it is hidden by concerns of moral kind. In Sade’s work, on the contrary, it is expressed in all its strength, and justified. This same awareness can be found, but only in part, in Hermann Nitsch’s works.

The purpose of the following paper is to explore the development of Sartrean ethics through a study of the critical essay Saint Genet, written by Sartre and published in 1952. It aims to provide some hints for considering a general question in moral aesthetics: what effects are generated by describing evil actions from an evil position with recognition of their malevolence, and how should we evaluate such descriptions morally, aesthetically and artistically? This paper focuses on the life and the works of Jean Genet from Sartrean’s philosophical and moral theory. 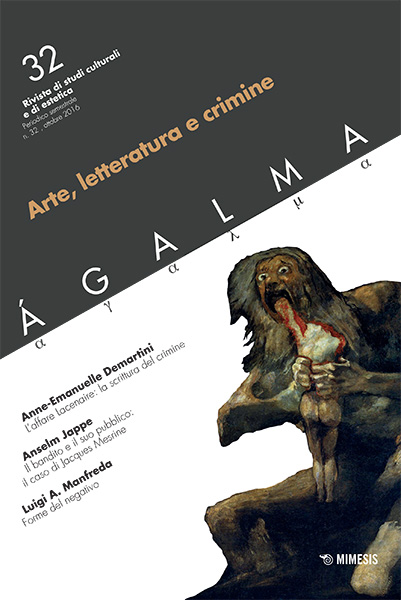