In Search of Social Recognition

This essay explores the notion of social recognition among minoritarian individuals and groups. Why a minority (political, religious, ethnic and so on) accepts the risk of being hated, rejected or worse but still remains coherent to its programme? What are the psychological processes for which a “deviant” subgroup pursues social “visibility” and “recognition”? According to several studies and experiments in the field of social psychology, there are different reasons for which this happens. Firstly, it is a matter of “attraction”: to be loved one has to be visible, and to be so, one must be perceived as existent. Secondly, a minoritarian individual or subgroup seeks social recognition because, in doing so, a legitimation of one’s own tendencies and aspirations is reached. To obtain, preserve and increase “visibility” is, therefore, an index of the influence one can have in a specific context and of the changes s/he is able to produce in it.

Minority as fabulation. Deleuze and missing people between literature and cinema

Minority as fabulation. Deleuze and missing people between literature and cinema. The article focuses on the book by Deleuze and Guattari devoted to Kafka and the concept of minor literature, and analyses its three characteristics: “deterritorialization” of language; immediate connection between individual and political; collective value. The article underlines how, according to the two authors, Kafka’s texts are “literary machines”, rich of assemblages, movement and desire, and not metaphors that have to be interpreted. Finally, the concept of becoming minor is referred to the cinema. The article mainly wants to emphasize the link between minority and “fabulation”: in fact, political cinema has the capacity to invent a “missing people”.

The objective of the essay is the exposition and commentary of the theses that Deleuze and Guattari present in their book dedicated to Kafka’s work, starting from that of ‘minor literature’, of which Kafka would be an example. Deleuze and Guattari have the merit in highlighting aspects of Kafkaesque text that are generally not considered, but neglect others that may lead to a thorough understanding of the Kafkaesque idea of writing.

Taking clues from the Twentieth century crisis in music, deconstructionism and deleuzianstudies, the essay proposes a journey into the aesthetics and the epistemology of a hypothetical “residual” and “minor” ontology, to be found particularly evident in the creative process, in the definition of a work of art, in its contingency and compositional structure. The essay then enlarges the topic to the evolution of psychological drives, the concept of causality and that of relation, all from a strictly epistemological point of view.

The Net-activism: the informative forms of dwelling and the crisis of the social vision of the world.

A new typology of conflict spread through several corners of the world and started a new world phase for activism marked by its informative and digital matrix. In net-activist actions, indeed, to fulfill the actions is no longer the Weberian theological individual nor the rational subject of Habermassian communicative action, but an actor-network, connected and part of a reticular ecology that articulates itself in a succession of action, through the exchange of connective acts.

Dandyism or the Greatness Without Convictions

This essay revolves around the aesthetic rebellion towards existence and society emerging from the dandy lifestyle. The dandy pursues everyday – though never declining into the “ordinary” – a way of life that can be defined in terms of “greatness without convictions” (grandeur sans convictions, as Charles Baudelaire wrote). “Greatness”, but of a particular kind from which the dandy emerges as the “king” of the inorganic against nature, of the “storiette” against History, of the futility against utility, and of the elegance against banality.

The destruction of Pacifism. Some Remarks about violence in Günther Anders

The aim of my paper is to explore the investigations of Günther Anders about the violence within the horizon of his philosophical thinking, and in connection with his idea of the (possible) physical disappearance of humanity and of the world due to the nuclear bomb. Anders was a theorist of power who philosophized about violence. He underscored the impotence of the politics of peaceful resistance, arguing that the ideology of non-violent resistance is superfluous and dangerous. In the face of the violence of violence, there is no non-violence, no pacifism.

The art and the protest 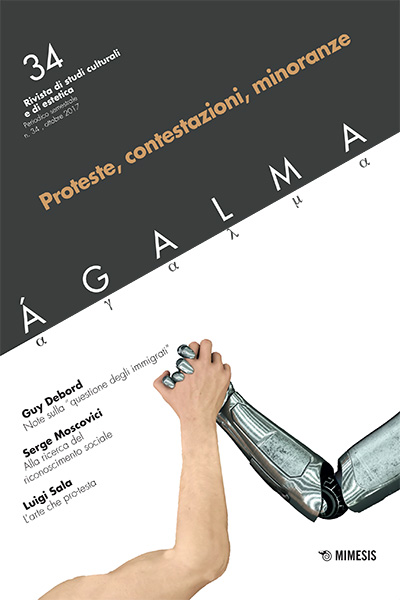