‘Simplicitas’ is the ability to match the internal dimension of man with the external one, fleeing duplicity and deception. It appears to be natural but implies the exercise of will and freedom as an answer that is non-indifferent to the need and desire for virtue. In particular, we try to demonstrate that ‘simplicitas’ is a habitus that can be acquired slowly, as a natural disposition that requires the desire to be simple and, consequently, a certain exercise of the will. The reflection is developed referring to the positions of some philosophers, very different and distant from each other, such as Aquinas, Descartes, Kant, Scaravelli and Levinas.

Capitalism is not only a problem of how its fruits are distributed. The past few decades have seen an increasing number of people refuse the capitalist concept of wealth altogether. In its place, they have adopted the notion of ‘simple living’ or ‘voluntary simplicity’. This perspective has a long history that begins with the ancient Greek philosopher Diogenes. ‘Degrowth’ is one of its most recent expressions and it has exposed some of the weaknesses of the traditional Marxist approach to technological ‘progress’. Nevertheless, it falls short of understanding the real essence of capitalism as the production of value, based on the ‘twofold nature’ of labour: abstract and concrete.


“Simple life” and the “primordial choice”

“Simple life” and the “primordial choice”

“Simple life” and the “primordial choice”

Moderation, simplification or the exclusion of wealth do not necessarily guarantee existential well-being. On the contrary, the quest for a peaceful, untroubled life can become a hidden source of unhappiness. This is why it is crucially important to examine why we choose to invent a simpler lifestyle, which brings us to take a closer look at the “primordial choice”.

In the tower. Montaigne, Rousseau and writing as self-care

The text aims at capturing, in the work of Montaigne and Rousseau, the use of writing to achieve greater self-knowledge and better control of one’s emotions and emotional life. The ethical sense of this operation will be characterized by the conquest of the simple inner core put in the shade by everyday life.

Simplex sigillum veri. The Philosopher, the Architect, the Writer

The aim of this paper is to investigate the topic of simplicity in the architectural work of Ludwig Wittgenstein, from the planning and building of the famous cube shaped house of his sister Margarethe in Vienna (during the years 1926-28) up to the several references to architecture in his philosophical writings. It is no coincidence, if the Austrian writer Thomas Bernhard, in his novel Korrektur (1975), incorporates the silhouette of Wittgenstein (one of his favourite philosophers) for the characterization of the protagonist, Roithamer. In connection with Wittgenstein, also Bernhard’s character decides to build a – this time cone shaped – house for his sister. The paper outlines a series of affinities between Wittgenstein and Roithamer, but also stresses the importance of simplicity in the two forms of life.

Since when Robert Venturi’s Complexity and contradiction in Architecture was published in 1966, “simplicity” in architecture has begun losing its appeal and, despite a certain inertia of its seductive power, has gradually slipped out of fashion. In the noisy and exhibitionist drift that seems to characterize much contemporary research in architecture, this text asks whether there is still room for simplicity; how many and what faces it has, how it can be defined and, finally, where it manifests itself. The discussion focuses on the three main moments in the making of architecture where simplicity can be revealed: the manifestation of the idea and the definition of the method, the choice of tools and “project materials”, and the aesthetic-formal result.

In Praise of Identity

In recent times, the issue of ‘collective identity’ has been among the most heated questions in political and moral discussion. The present contribution tries to argue for a viable model of collective identity, to be provided by contrast with Francesco Remotti’s well-known polemical stance against identity. In the wake of Hegel’s notion of historical ‘Aufhebung’, and MacIntyre’s notion of social practice, we are going to show, first, that collective identities are not conceivable according to the abstract model of logical identity and substantial permanence. Secondarily, we are going to show that a viable notion of identity must rely on the idea of historical path-dependence: such an identity must comprehend and cultivate its cultural and material heritage in order to intelligibly project future action. Problems of anomy and disorientation related to problems of collective identity are hard to deny in contemporary societies. Although the risks of political identitarianism are not to be denied, we conclude that, if we want to effectively avoid identitary degenerations, it is highly advisable not to take the shortcut of merely discrediting identity.

Carlo Michelstaedter and the desire “to make himself flame”

The purpose of the essay is to show the birth of the notion of “persuasion” in conjunction with the strong passions which are inhabited in Michelstaedter. Especially with the short erotic experience that he lives next to the one he had chosen as his muse, Nadia Baraden. The Russian woman is considered by a young philosopher “persuaded” ante litteram. With her, he thought to give rise to a singular “lovers community” to raise an alternative to the “communities of the wicked”. But Nadia’s suicide will bring him down all hopes. Michelstaedter will write his most important work, La persuasione e la rettorica, under her influence. As well as, having always in mind the image of Nadia, almost in a spirit of emulation, he will take his final and definitive decision.


A Thing That Feels. Love and Seduction in Mario Perniola’s Philosophy of Transit

A Thing That Feels. Love and Seduction in Mario Perniola’s Philosophy of Transit

A Thing that Feels. Love and Seduction in Mario Perniola’s Philosophy of Transit

From Transiti to Del sentire, from La società dei simulacri to Il sex-appeal dell’inorganico, the intention of the essay is to investigate Perniola’s notion of transit in order to theorize the monism that bears the radical difference between the self and the world. My argument is that even if it is true that there is an infinite distance that divides us from the world, it is also true that there exist moments of delicate and transient harmony in which we are somehow connected to the world to the point of feeling part of the same thing. In order to argue that, I focus on love and seduction through the notion of transit. The notion of transit is in fact able to show that love and seduction are nothing but folds of the same that keeps transit on itself creating those movements of opening and closing, run and escape, grasp and loss, that characterize the emotional, sexual, and loving experience of every human being.

Understanding of the expositive and curatorial logic in the contemporary Artworld. The position of “critical resistance” proposed by Tomaso Montanari and Vincenzo Trione

The paper aims at highlighting the theoretical productivity of the “critical-resistance position” promoted by Tomaso Montanari and Vincenzo Trione, in their recent pamphlet “Contro le mostre” (Torino, 2017), in the context of a new understanding of the curatorial and expositive logic in the contemporary Artworld. In this perspective, particular emphasis is devoted to the possible significant assonance between the need, claimed by the authors, of the expositive location rethinking it as an “elaborative space”, that constitutively is open to the “production of the possible”, and the aesthetical-philosophical paradigm elaborated by Th. W. Adorno, in particular with regard to the “auratic” dimension of art and to the nexus “art-thinking”. 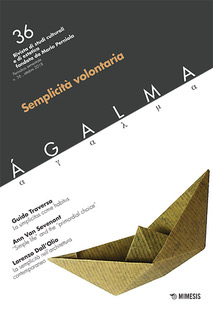